Florence and the Machine

This was my second time seeing Florence and the Machine perform live in Perth, unfortunately I didn’t get a photo pass so I was taking a few snaps from the crowd but decided to actually put the camera down and just enjoy the music. Absolutely fantastic, and still one of the best bands that I’ve ever seen live and I’m quite lucky that I get to see quite a few, can’t wait to see them again and hopefully one day photograph them from the pit.

The first time I saw Robbie Williams perform live was 17 years ago at Glastonbury and he was fantastic, I’m not professing that the music is entirely my cup of tea but he is a natural performer and he put on an amazing show for the punters. Copyright Emma Bryant Photography/WENN 2015

It was really fantastic to be given the opportunity to photograph such a massive music star in such a small venue, it’s amazing that so many international musicians are now stopping in Perth en route to Sydney. There’s still time to persuade Madonna that it’s worth the trip.

Clarkson, Hammond and May Live

Had a great weekend shooting the (ex Top Gear ) chaps, thanks for the complimentary tickets really enjoyed the show. Copyright Emma Bryant Photography/WENN 2015

I have a double page feature in this seasons ABC Organic Gardener Essential Guide Magazine from a shoot that I did a couple of months ago with the lovely Josh Byrne. 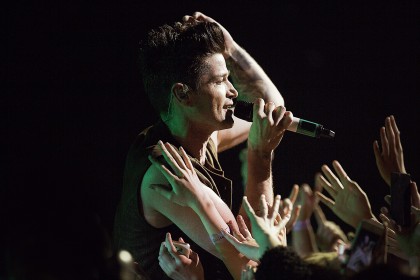 West Coast Blues and Roots is my favourite festival in Western Australia so I’m really glad I got to cover it for the third time in a row. This was my favourite shot of the day the incredibly talented Paulo Nutini who I first photographed nine years ago in Edinburgh, dunno where the time has gone.

Kylie – Kiss me Once Tour